Kirkland is easy on the eyes, to put it mildly. Sitting on the edge of sparkling Lake Washington, residents enjoy views of both Mount Rainier and the Seattle skyline. But it’s not just looks that give locals bragging rights. They describe the Seattle suburb as a family-friendly, community-focused town with great schools and employment opportunities.

Kirkland residents do pay a premium for their waterfront lifestyle, with the average 1-bedroom rental nearing $2,000 and the median home sale prices topping $1 million. But there are enough high-paying jobs in the region that the median household income — just under $130,000 — is well above average, too.

Evergreen Health, a healthcare system with two hospitals in the region, is the largest employer in town. Newer companies, including radar manufacturer Echodyne, software supply chain security firm Chainguard, and real estate lender Rain City Capital, all call Kirkland home. Plus, the headquarters of Microsoft and Nintendo’s American operations are just a town over in Redmond.

Job openings are expected to grow by more than 10% in the next few years. The city has attracted several start-ups and has encouraged existing companies to grow in Kirkland. Google just opened two new buildings as part of its planned 760,000-square foot “Kirkland Urban” campus.

When it’s time to sign off, residents can stroll through the city’s lively pedestrian-friendly downtown district, visiting locally owned coffee shops and an outdoor sculpture gallery, before grabbing a bite at Lynn’s Bistro, Reunion Market Cafe or Bottle & Bull. For a fancier meal, head a couple miles north to Café Juanita. The regional favorite is known for its Northern Italian-inspired tasting menus and outstanding service.

On the edge of downtown lies Marina Park, which hosts weekly outdoor concerts in the summers, as well as some of the city’s larger events, like Kirkland Summerfest, a three-day festival featuring live music, arts & crafts, wine tastings, and the “Sails and Ales” beer fest.

Marina Park, while centrally located, offers just a taste of the city’s vast collection of parks, a local point of pride. A quarter of the city’s lakefront is accessible via public parks. Residents can bike along paved paths on the lakefront, hike through wooded forestlands, picnic on sandy beaches or bird watch from boardwalks. — Kaitlin Mulhere 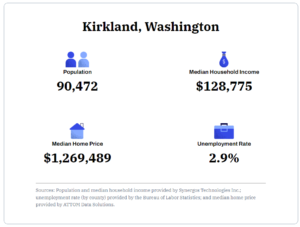 In May of 2022, NW Reporter shared some information on our rising WFH state; Check it out!

Washington is among the top 10 work from home (WFH) states, according to rankings compiled by WalletHub. Using 12 key metrics to compare the 50 states and District of Columbia, that personal finance website ranked Washington #8. New Jersey was #1.

Based on these two dimensions and corresponding weighted scores, Washington ranked 11th for Work Environment (D.C. was #1) and 19th for Living Environment (Texas was #1).

Looking at the 12 key metrics, the report had Washington ranked:

On April 3rd, Dwell.com featured my Shoreline listing. Check it out!

This beautifully maintained midcentury home was designed in 1962 by Seattle–based modernist architect Ralph D. Anderson—who was an early advocate for preservation in the region. A soaring, double-height wall of glass in the living room brings a sense of the home’s forested surroundings to its interiors.
Character-filled elements of the home’s midcentury roots remain—including a slightly sunken living room, a circular staircase, a tongue-and-groove ceiling, wood paneling, and a kitchen countertop crafted of salvaged teak from a 1960s battleship.